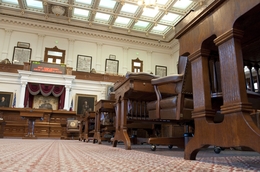 Enlarge Bob Daemmrich
The chamber of the Texas House 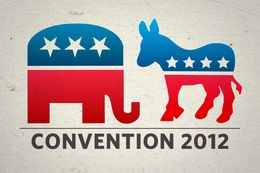 The battle between the left and right to court the state’s so-called “sleeping giant” — the Latino vote, is raging. Republicans contend their social and economic priorities are more in line with the state’s fastest-growing demographic. Democrats, meanwhile, say their traditional grip on Hispanics isn’t slipping.

Though in theory the platform sets forth official positions on topics as diverse as foreign policy and legislative procedure — and as specific as the HIV/AIDS crisis and the federal minimum wage— many officeholders take it as more of a guide than a rulebook.This year, the biggest debate may be not about what the document says, but what it doesn't.

For this week's nonscientific survey of governmental and political insiders, we asked about the election results, about Joe Straus' chances for another term as speaker, about who might replace David Dewhurst as presiding officer of the Senate, and about who'll control that selection. 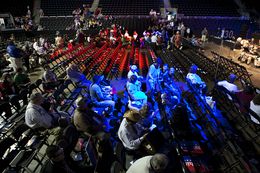 The Republicans and Democrats have something newat their conventions this year: Candidates who haven't finished their primary elections.

The donors didn’t see it as a winnable race, particularly after Bill White. That made them feel that Texas wasn’t winnable for a Democrat, and they’re putting their money elsewhere.

Sean Hubbard, who placed fourth in the Democratic primary for U.S. Senate

It offers a great opportunity for the party to sell exhibition space to campaigns.

You can step on your dick. You just can't jump up and down on it.

Former Mississippi Gov. Haley Barbour, on Rick Perry's "Oops moment" in the presidential campaign, quoted in the book Election 2012: A Time for Choosing

I thought they were saying 'Dewwwww'.

Gov. Rick Perry, on getting booed for his endorsement of David Dewhurst at the state GOP convention

My job's pretty simple. I go into the office, I sue the federal government, and then I go home.

Candidates come and go, and for too long our party has been in the position of looking for that one candidate, that media star that is going to carry us instead of us carrying them. So as we go forward it is my hope that we will have a party that can carry candidates instead of having candidates that can carry the party.

On the second leg of his two-day swing through Texas, Mitt Romney set a local fundraising record in San Antonio, bringing in at least $3 million from South Texas donors. Gene Powell, the University of Texas System Board of Regents chairman, who organized one of the fundraisers, said the day's events for Romney had doubled the previous local record, set in 2008 at a John McCain-Sarah Palin event attended by Palin. Romney on Wednesday also attended a fundraiser in Houston, where he was introduced by former Secretary of State James Baker. The day before he hit San Antonio, Romney campaigned in Fort Worth.

Lt. Gov. David Dewhurst praised a court ruling upholding a $26 million verdict for Jordan Fishman, a Florida businessman who has claimed that two foreign companies stole his tire designs. Dewhurst has spanked U.S. Senate rival Ted Cruz for his work as an appellate lawyer for one of the companies, a Chinese tire-maker. "Justice was served," Dewhurst said. A Cruz spokesman hit back: "Dewhurst has spent over $10 million of his personal fortune falsely attacking Ted Cruz, all in an effort to distract voters from Dewhurst’s tax-and-spend record — and the voters saw through the Dewhurst deceptions."

Ted Cruz and David Dewhurst have agreed to debate before the July runoff, but an unexpected sticking point developed this week: the English language. Though neither of the two U.S. Senate candidates in the July 31 Republican primary runoff is actively working to organize a Spanish-language debate, the idea gained attention from a Univision report this week, and national media coverage sparked erroneous reports that such an event is actually in the works, a claim both campaigns now deny.

A Bexar County judge ruled this week that state Sen. Jeff Wentworth’s defamation lawsuit against his former primary challenger Elizabeth Ames Jones may proceed. Wentworth had filed a libel and slander suit against Jones for her campaign ads claiming that he had double-billed his campaign and the state for expenses related to air and car travel. In a surprise, Jones ended up finishing third on May 29, behind Donna Campbell, who will face Wentworth in a runoff.

The Legislative Budget Board, headed by House Speaker Joe Straus and Lt. Gov. David Dewhurst, has asked state agencies to propose 10 percent budget cuts for their next two-year budgets. No programs or services will be cut, but the agencies are expected to show lawmakers what the 10 percent cuts would do.

Ramiro Garza Jr.was reinstated as city manager with a unanimous vote by the Edinburg City Council after losing his bid for U.S. Congress.

Lisa Woods, who previously worked at the comptroller's office, is rejoining the agency as chief strategy officer. Most recently, Woods was leading strategic initiatives and building fundraising capacity at the University of Denver.

Ian Randolph, who previously served as chief of staff to state Sen. Eddie Lucio, D-Brownsville, has joined Premier Legislative Consulting, an Austin-based firm, as a partner.

Deaths: Rep. Ken Legler, R-Pasadena, apparently from a heart attack. He was 54.