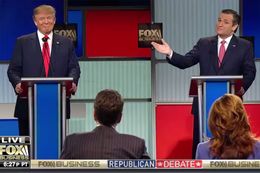 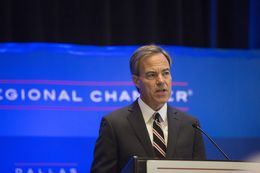 Enlarge Laura Buckman for The Texas Tribune
Joe Straus, Texas Speaker of the House, speaks at an 85th Legislation Session Preview at the Dallas Regional Chamber on Tuesday, Sep. 13, 2016.

For this week’s nonscientific survey of insiders in government and politics, we asked about several recent pronouncements coming from leaders in the state.

I don’t think there are a whole lot of voters in this country that give a flying flip about the birther issue.

Ted Cruz, defending Donald Trump after Monday's presidential debate where his role in the birther movement was questioned

I think I have to apologize and say, maybe, perhaps, those of you who said Ted Cruz is calculating and a smarmy politician, I think I may have to slightly agree with you and apologize for saying, 'No, he wasn't.'

Honestly I haven’t had this much fun with an election in a really long time. Is it time to start doing opposition research on the other teams?

Deirdre Delisi, former aide to Rick Perry, confessing via Facebook to voting 65 times for her former boss to keep him on "Dancing With the Stars"

There’s a lot of homespun sense of place in Iowa, but there was no place where people served me waffles the shape of Iowa.

We’re conducting a survey of Texas Tribune readers. Your responses will help us get to know you — and how we can serve you — better. Do you have 10 minutes to help The Texas Tribune? Take the survey now.

State Rep. Dawnna Dukes, D-Austin, is resigning in January, a decision she said is a result of health issues related to a 2013 car accident and concerns over caring for her 9-year-old daughter. Her name will still be on the November ballot, and if she wins, Gov. Greg Abbott could call a special election to fill her vacant seat.

Walnut Springs Elementary School's decision to allow a transgender student, born a boy, to use girls' bathrooms sparked contentious debate during a Monday night meeting of the Dripping Springs ISD school board.

After more than two decades of effort by lawmakers to install a monument at the Capitol celebrating African-Americans, the main components of a bronze and granite memorial were quietly lowered onto the south lawn on Tuesday.

Former Gov. Rick Perry was eliminated from the ABC program “Dancing with the Stars” on Tuesday night. The loss came at the hand of another Texan, Vanilla Ice. On Monday night, the two were pitted against each other ahead of Tuesday's elimination round with Ice winning immunity in a tiebreaker.

Texas Department of Public Safety Director Steve McCraw told state lawmakers Wednesday that the $800 million border surge has made two counties safer. But he conceded that the rest of the border is more vulnerable.

Texas House budget and public education leaders said Wednesday that the best way to overhaul the state’s school finance system is to increase the base amount of money it gives to each district per student.

University of Texas System Regent Wallace Hall has filed an appeal to the Texas Supreme Court to get access to confidential student records that UT System Chancellor Bill McRaven has denied him.

Disclosure: The University of Texas System has been a financial supporter of The Texas Tribune. A complete list of Tribune donors and sponsors can be viewed here.

Republican HD-126 candidate Kevin Roberts announced Tuesday that he’s received the endorsement of the political arm of the Associated Builders & Contractors of Greater Houston. Roberts is running to succeed state Rep. Patricia Harless, R-Spring, who opted against a run for re-election to the Harris County House seat.

The political arm of Texans for Lawsuit Reform announced on Wednesday that it has endorsed Republican candidate Dawn Buckingham for SD-24. She is facing off against Democratic candidate Jennie Lou Leeder for the right to represent the Senate seat being vacated by Horseshoe Bay Republican Troy Fraser.

Republican Harris County District Attorney Devon Anderson announced an endorsement Friday of her re-election bid by the Association of Women Attorneys. And she racked up another endorsement this week from state Rep. Sarah Davis, R-West University Place. Anderson is being challenged in the fall general election by Democratic candidate Kim Ogg.

Disclosure: The Texas Association of School Boards, the Texas Comptroller of Public Accounts, the Texas Parks And Wildlife Department, the Texas General Land Office and Patricia and Sam Harless have been financial supporters of The Texas Tribune. A complete list of Tribune donors and sponsors can be viewed here.