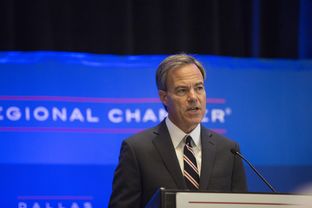 Enlarge Laura Buckman for The Texas Tribune
Joe Straus, Texas Speaker of the House, speaks at an 85th Legislation Session Preview at the Dallas Regional Chamber on Tuesday, Sep. 13, 2016.

Wolens replaces Paul Hobby, who stepped down earlier this year, months after his term expired. Straus gets to appoint two members of the eight-person panel — one from each party — and Wolens counts as his Democratic pick.

Wolens, now a Dallas lawyer, served in the House from 1981-2005, during which he authored ethics legislation. In a statement, Straus said Wolens "will help ensure that the Ethics Commission maintains its independence and protects the transparency of our political process."

Wolens' appointment comes as conservative activists continue to press state leaders to deal with "holdovers," or members of the commission whose terms have expired but whose replacements have not been selected. Wolens’ term is set to run out in November 2019.

The statewide leadership team includes many elected officials who are already supporting Trump, as well as some who have been less vocal. Former Gov. Rick Perry is serving as honorary co-chairman of the team and Republican National Committeewoman Toni Anne Dashiell as vice chair.

In addition to Patrick, Perry and Dashiell, the team so far includes:

"The committee members will support and strengthen ties to each community and provide recommendations on how best to ensure AAPI voices are heard and included in the Campaign," the campaign said.