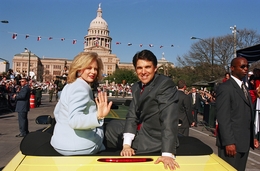 The rules are a little different for completing the terms of statewide executive officials who leave office early. 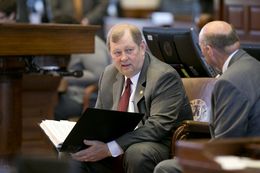 John Otto is one and done as House Appropriations chief. How many more served just one term? 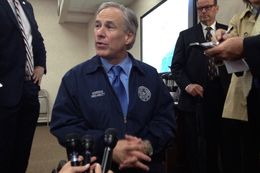 Enlarge Eva Hershaw
Gov. Greg Abbott speaks to reporters at the Security Operations Center at the Department of Public Safety on May 12, 2015.

Also, other candidates provide peeks at their upcoming campaign fundraising reports, and Glenn Hegar says the state won't need to take out short-term TRAN notes for next fiscal year.

For this week’s nonscientific survey of insiders in government and politics, we asked about Ken Paxton's future, political and otherwise.

There is no good-looking Confederate flag. It all stands for the same thing — secession.

Lonnie Randolph, president of the South Carolina chapter of the NAACP, on removing the battle flag from the Capitol grounds

But when we gave up trying to win the support of African-Americans, we lost our moral legitimacy as the party of Lincoln.

Rick Perry in a speech last week in Washington, D.C., in which he said Republicans must reach out to black voters

That’s not the conversation for this day.

State Rep. Cecil Bell Jr., R-Magnolia, disappointing those on Monday who thought he would announce for House speaker

I … shall resist unlawful federal or state court encroachments upon the prerogative of the people of Texas to protect natural marriage.

But it’s not the horrible problems that usually are the things that cause foodborne illness outbreaks. It’s the little things.

Bill Marler, an attorney who specializes in foodborne illnesses, on the challenges in keeping foods safe to eat

The problem we have is not serving healthy foods, but instead of having healthy children we have healthy trash cans.

Days after an undocumented laborer was charged with the murder of a San Francisco woman, former Gov. Rick Perry called for federal funding to be pulled from so-called sanctuary cities — the common term for local governments that don't enforce federal immigration laws.

After a decade in the Texas House and fresh off his first session as chairman of the powerful Appropriations Committee, state Rep. John Otto, R-Dayton, announced he won’t seek re-election. Otto joins a group of experienced lawmakers who aren’t returning to the Legislature next session.

Texas collected less state sales tax revenue in June than it did in the same month a year earlier, ending a remarkable 62-month streak of growth, Comptroller Glenn Hegar said Wednesday. The state collected $2.2 billion in state sales taxes in June, down 1.4 percent compared with June 2014. Hegar said the drop “was expected due to the slowdown in the oil and gas mining sector.”

University of Texas System Regent Wallace Hall was asked to leave a closed-door regents meeting Wednesday in which his lawsuit against UT Chancellor William McRaven was discussed. The regents later voted to urge Hall to drop his lawsuit, saying it could be “costly and an unnecessary distraction.”

The name of Attorney General Ken Paxton, already facing a potential indictment by the state for first-degree felony securities fraud, surfaced in a federal probe of a company in which he is an investor. Paxton owns at least 10,000 shares in Servergy, which is based in his hometown of McKinney.

Ted Cruz said his campaign and the super PACs that support it raised about $10 million during the second quarter, bringing the total available to promote his campaign to $51 million. That might be enough to outpace all but one other candidate in a Republican field that is trying to catch up with former Florida Gov. Jeb Bush in the fundraising race.

Erin Lunceford was named judge of the 61st Judicial District Court in Harris County by Gov. Greg Abbott for a term to expire at the next general election.

Abbott has made seven appointments to the Texas Board of Nursing:

McCall Johnson has hired on with Recurrent Energy as government affairs manager for the ERCOT, SPP and MISO regions. Prior to that, she was an advisor to Chairman Donna Nelson at the Public Utility Commission of Texas.

Heath Mayor Lorne Liechty will run as a Republican for the House District 33 seat being vacated by Scott Turner. Liechty was elected mayor in 2012 after serving on city council from 2004-12.

State Rep. Chris Paddie, R-Marshall, announced on Thursday that he will run for re-election in the East Texas-based House District 9.

State Rep. Wayne Smith, R-Baytown, announced on Monday that he will run for re-election. He is in his seventh term representing the Harris County-based House District 128.