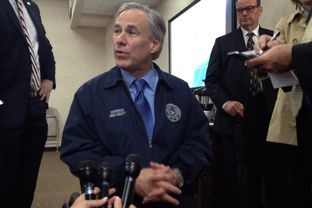 Enlarge Eva Hershaw
Gov. Greg Abbott speaks to reporters at the Security Operations Center at the Department of Public Safety on May 12, 2015.

Gov. Greg Abbott continues to prove himself a master fundraiser.

His campaign announced on Wednesday that he will report a haul of $8.25 million in the nine-day period between the end of the legislative session’s moratorium on fundraising and the cutoff for the July 15 semiannual report.

During that period, his campaign said, Abbott received more than 2,000 donations, with more than 80 percent of them coming from online.

The fundraising haul is also significantly bigger than the $4.8 million raised in the first half of 2013, the last time the Legislature met in regular session.

Senate District 1 candidate David Simpson announced that he raised more than $150,000 from more than 120 contributors in the eight days between the end of the legislative session's moratorium on campaign contributions and the cutoff date to report fundraising activity for the July 15 report.

The Simpson campaign noted the total does not include any candidate loans.

Simpson, a Longview Republican currently representing House District 7, is facing off against fellow House colleague Bryan Hughes, R-Mineola, in the GOP primary contest for the Senate seat being vacated by Kevin Eltife, R-Tyler.

We’ve also got some fundraising announcements from the race for Houston mayor.

State Rep. Sylvester Turner, who was under the same fundraising moratorium as Abbott, raised $750,000 in those nine days of activity before the June 30 cutoff for the semiannual report.

That, as the campaign noted, meant that Turner was raising money at a more-than-$80,000-a-day clip.

Businessman Bill King, who wasn’t affected by the fundraising moratorium on state officeholders, will report raising $1.25 million by the June 30 deadline, according to an announcement from his campaign.

Of that total, the King campaign said that $750,000 came from about 600 donations. That would suggest the remainder was money that the candidate gave to his campaign.

Jeb Bush will be coming to Austin in mid-August.

The former Florida governor's presidential campaign put out a save-the-date for a fundraiser on Friday, Aug. 14, at a to-be-determined location.

The invitation obtained by The Texas Tribune encourages both personal donations and bundling. Individual suggested donations range from $500 to the federal maximum for a primary campaign, $2,700.

Rick Perry has brought on board Karen Fesler as co-chair of his Iowa campaign.

She joins Sam Clovis at the top of the Hawkeye State operation for Perry.

Comptroller Glenn Hegar announced Tuesday that he was happily skipping what has become an annual tradition for his office: issuing some short-term debt to cover costs as the fiscal year closes out.

The comptroller has issued Texas Tax and Revenue Anticipation Notes (TRAN) every year for nearly three decades, according to Hegar's office. The shortfall emerges in large part because the state is required to provide nearly half of its annual payments to local school districts in the first three months of the fiscal year.

This year, lawmakers left enough money in the state's general fund as well as in the Economic Stabilization Fund (i.e., the Rainy Day Fund) to cover the shortfall without a TRAN.