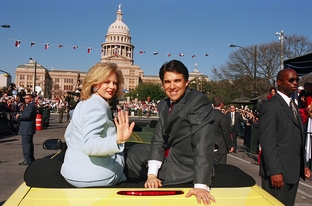 The procedures for replacing state lawmakers who leave office during their term are relatively clear, as that’s a frequent occurrence.

What’s not so frequent is elected statewide executive officials leaving their office before their term is over. So what happens if that’s the case?

The most prominent example of a statewide executive official leaving their term early is, of course, George W. Bush, who ended his gubernatorial term after he was elected president. Rick Perry, who was the lieutenant governor, replaced Bush and was then elected to a full term as governor in 2002.

But other statewide executive officials — such as the attorney general, comptroller and commissioners — can leave an elective office vacant, too. (So can elected statewide judges and justices, but that’s a whole other story.)

An office can become vacant in multiple ways, including the officeholders' resignation, death, removal from office, acceptance of another office that they can’t hold at the same time or if they’re deemed ineligible to serve. That last reason includes if the officeholder is convicted of a felony, which bars anyone in the state from holding an elective office.

Once a vacancy happens, the governor must appoint a replacement, which requires Senate approval if it’s during the session. But that appointee wouldn’t necessarily serve out the rest of the term.

Let’s pause to consider what happens if a state legislator leaves office during his or her term. A special election is generally held to determine a replacement. That election can often happen on a separate date from other elections, so the state legislative race can sometimes be the only race on the ballot.

That’s not the case with these statewide executive officials. Elections for those offices only occur on even-numbered general election years, so they can only happen in 2014, 2016, 2018 and so on, when a number of other races are on the ballot.

But there is a point when it becomes too late to elect someone to serve the rest of the term, which means the governor’s appointee would finish off the term.

That happens if the office becomes vacant after the 74th day of the year of the next-to-last general election before the term ends. That sounds a bit complicated, but here’s what that language means.

Here’s an example for officials who serve four-year terms. Let’s say an official is elected in November 2014 but leaves office before the 74th day in 2016. Then, voters would choose who finishes off the term on their 2016 general election ballots. The governor's appointee would serve until the winner of that 2016 election takes office.

If that official instead left office after that 74th day of 2016, then the governor’s appointee would finish off the term, and there would be no election for that office until it’s up again in 2018.

And recent history provides an example of a six-year term executive official leaving office early. When Michael Williams left his railroad commissioner term early to run for Congress, Barry Smitherman was appointed in 2011 to take his place.

But the term technically didn’t end until 2014, which meant there would be a general election date in 2012 before the term ended. Smitherman, then, had to run for the seat in 2012 to hold onto that spot and serve out the rest of the term.

And if he wanted to serve a full term as commissioner, Smitherman would’ve had to run for the seat again in 2014. He chose not to and instead ran for attorney general, although he lost in the primaries.

Williams, meanwhile, lost the 2012 primary for that congressional seat. But later that year, Perry appointed him as state education commissioner, a position that’s appointed, not elected.