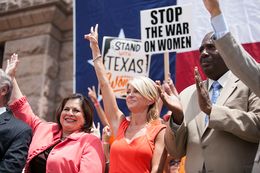 You would think, from all this chatter, that Wendy Davis was the name of the newest iPhone. 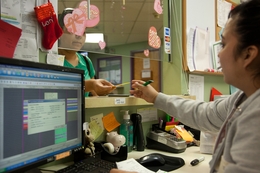 Enlarge Jeff Heimsath
A patient at The People's Community Clinic pays her bill as the cashier’s desk. The Community Health Assistance Program, a program that helps Texans get access to insurance, will run out of federal grant money in a few weeks.

In the same week that the U.S. Census Bureau released new data showing Texas again ranks highest for the rate of people without health insurance, Gov. Rick Perry quietly laid out his next efforts to derail Obamacare. 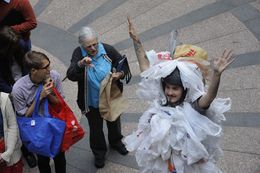 Now that a lawsuit against Austin over its single-use bag ban has been dropped, other cities that were eyeing their own ordinances could be emboldened to push them through their councils — if they can avoid big political fights.

For this week’s nonscientific survey of insiders in politics and government, we asked about 2014’s race for lieutenant governor, whether a prominent Democrat will get in and how she’ll fare, and about the four-way race for the Republican nomination. 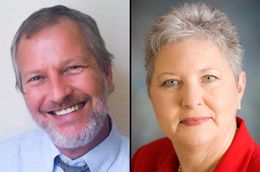 The 13 state-supported living centers are dangerous, derelict and inefficient. The time has come to consolidate the population in fewer facilities and close centers that have no chance of ever reaching minimally acceptable standards.

You stop the rumors by winning.

I’m not running for anything, you know, neither one.

San Antonio Mayor Julian Castro, on The Insiders with Dave Price, a Des Moines political show, on the 2016 races for president and vice president

I mean, the blind salamander? How long are we gonna let that little bugger last?

Lt. Gov. David Dewhurst, at the same forum, quoted by the Houston Chronicle

He’s ecstatic. He’s gratified. He’s just a little bit numb. I’m hoping with today’s victory, he will be able to resume his life as he once knew it.

A top House Republican aide, quoted by CNN in response to U.S. Sen. Ted Cruz's assertion that a bill to defund Obamacare would die in the Senate

I have expressed some hesitancy to look at a statewide campaign for me in 2014, but politics is when timing and opportunity collide. And I also recognize that you cannot want change if you're not willing to be the agent of that change.

If it’s Wendy Davis vs. Greg Abbott, then she has a 40 percent chance of winning.

Gov. Rick Perry directed the Texas Department of Insurance to establish strict rules to regulate so-called navigators trained to help Texans purchase health coverage under "Obamacare." While the governor says the extra regulations will ensure that people handling Texans’ private financial and health information are properly trained and qualified, the rules could present a significant roadblock to organizations helping to implement the federal Affordable Care Act. Along with many other provisions in President Obama’s signature health reform law, the individual mandate to purchase health insurance is set to take effect on Jan. 1.

Former U.S. Rep. Tom DeLay’s political money laundering and conspiracy convictions were overturned by the state’s 3rd Court of Appeals. “Based on the totality of the evidence, we conclude that the evidence presented does not support a conclusion that DeLay committed the crimes that were charged,” the judges ruled. “The fundamental problem with the State’s case was its failure to prove proceeds of criminal activity.” The decision reversed DeLay's trial court conviction. The Travis County district attorney's office prosecuted DeLay, and plans to ask the full Texas Court of Criminal Appeals to review the ruling.

Citing a late change in the nondiscrimination ordinance that San Antonio recently passed, a spokesman for Texas Attorney General Greg Abbott said the state is now unlikely to file suit. A clause that disallowed appointed city officials to “demonstrate a bias, by word or deed” was deleted from the ordinance before the San Antonio City Council passed it on Sept. 5 with an 8-3 vote. The ordinance is aimed at preventing discrimination on the basis of sexual orientation and gender identity.

Two groups representing minority voters and officeholders sued to block the state’s new voter ID law, which will be used for the first time in a statewide Texas election this November  — barring intervention by a court. The new law requires voters to show an approved photo identification card when they vote. Its requirements “have a discriminatory effect ... and were enacted with a racially discriminatory purpose,” according to the lawsuit filed against the state by the Texas State Conference of NAACP Branches and the Texas House’s Mexican American Legislative Caucus.

There is a new Senate Select Committee on Transportation Funding, set up by Lt. Gov. David Dewhurst to oversee highway improvements — including, specifically, “roads targeted for conversion from paved to unpaved.” Tommy Williams, R-The Woodlands, will chair; Robert Nichols, R-Jacksonville (and a former highway commissioner), was named vice chairman.

Becky Motal, general manager of the Lower Colorado River Authority, will retire at the end of the year. She’s been in that job in July 2011. LCRA has been under fire during the drought, trying to balance competing interests from Central Texas to the Gulf of Mexico.

Kevin Patteson is the new executive director at the Texas Water Development Board. He is currently the director of the state’s Office of State-Federal Relations and is a former assistant general counsel to Gov. Rick Perry.

William Briggs and Daniel Bravo take over as the new CFO and COO, respectively, at the Texas Department of Assistive and Rehabilitative Services. Briggs, a CPA, has worked in state government accounting for more than 30 years. Bravo was in charge of regional administrative services at the state’s Health and Human Services Commission.

Allison Castle, the governor’s director of communications, is leaving for the Texas Department of Insurance, where she will become deputy commissioner for public affairs.

Sen. Ken Paxton, R-McKinney, picked up an endorsement from the Texas Home School Coalition Association in his bid for attorney general.

• Jodie Baggett of Ozona and Katie Stavinoha of The Woodlands to the Texas Lottery Commission. Baggett is a partner in a family-owned ranching operation; Stavinoha is a former public affairs director for Koch Companies Public Sector and served as a spokesperson for several state agencies before that.

• Harold Hahn, chairman and CEO of Rocky Mountain Mortgage, to chair the Texas Higher Education Coordinating Board. He had been the vice chairman. The governor chose Robert Jenkins Jr. of Austin — president of ABC Home and Commercial Services — to be vice chairman.

• Jason Hester of Leander, Johnny Lovejoy II of San Antonio and Randall County Sheriff Joel Richardson of Canyon to the exas Commission on Law Enforcement. Hester is a major at the Texas Department of Public Safety and Lovejoy is president and CEO of Lovejoy & Associates.

• Catherine Rodewald of Dallas, retired president of Prudential Asset Resources, to the Texas Commission of Licensing and Regulation.