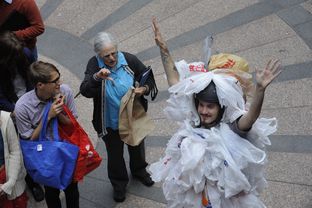 The war on plastic bags is back.

Six months after Austin’s ban on most disposable plastic and paper bags took effect at checkout counters across the city, political fights are raging in Laredo and Dallas to follow suit.

In Dallas, the debate over a single-use bag ban (for both paper and plastic bags that don’t have a certain amount of recyclable material) has led to allegations of false information within the City Council and is likely to drag on for months in that body's Quality of Life committee. Still, many consider the fact that it’s being debated at all to be progress; in 2008, an ordinance on bags was proposed and quickly tabled.

The political environment may have changed further, now that the Texas Retailers Association has decided to drop its lawsuit against the city of Austin's bag ban. The association had alleged the ordinance violated Texas’ Health and Safety Code.

“It could have had a chilling effect,” Jeremy Brown, and environmental law research fellow at the University of Texas at Austin, said of the lawsuit. “You’re a city and you want to avoid litigation generally. Now that the lawsuit has been dropped, he said, “maybe there’s an impression of reduced political risk.”

But the retailer lobby against such bans remains strong. H-E-B, the plastic bag manufacturer Hilex Poly, chambers of commerce and the retailers group have bused supporters to various public meetings across the state to make their voices heard.

“This isn’t just about plastic retail bags,” said Phil Rozenski, director of sustainability at Hilex Poly, which has three facilities in the Dallas Fort-Worth area. “We’re talking about an industry that is American-based, that employs 30,000 people.” According to the American Progressive Bag Association, 4,500 people work at 34 plastic bag manufacturing sites across Texas.

In Laredo, an outright bag ban appears to be off the table. Instead, a “reduction ordinance” is more likely, and now the argument is over what form such a law might take. Should the city adopt a fee-per-bag structure, as was recently done in Washington, D.C. and Montgomery County, Md., where shoppers pay 5 cents per single-use bag? Or should it go the Brownsville route, where shoppers pay $1 for an unlimited number of bags? (In each of those cases, retailers keep a small portion of the fee, and the rest of the money goes to a public environmental cleanup fund.)

H-E-B is lobbying hard for the dollar/unlimited option. That’s because “if it’s a per-bag fee, each bag needs to be scanned,” said Linda Tovar, spokeswoman for the company’s border region corporate office. “So the time that it takes for a cashier to process and order will be longer than what a usual process may be.”

Environmental advocates say there’s no logic behind that mechanism. In Brownsville, the first Texas city to pass a single-use bag ordinance, officials hoped the $1 charge would be temporary, since it would provide an incentive for customers to bring their own reusable bags. But revenue from the fee has actually tripled from 2011 to 2012, suggesting habits weren’t changing and leading to allegations of a “slush fund” for the city, which has raised more than $2 million from the law.

Companies say they’d rather see voluntary programs and education campaigns, pointing out that a patchwork of different city ordinances are difficult to follow and encourage shoppers to cross city lines for cheaper bags. So far, though, such efforts have not had much success. Before passing the bag ban, Austin spent more than a year on an aggressive education campaign promoting reusable bags before abandoning it, after failing to reach a declared goal of reducing plastic bag use by 50 percent. The city is now spending nearly $1 million on a similar campaign.

“I think it’s actually creating more of a problem,” said Fraser, who tried unsuccessfully to put a voluntary reduction system in state law during the 2011 legislative session. “I’m still not a proponent of just the cold-turkey removing of the bags.”

With Corpus Christi also eyeing an ordinance, though, it’s likely the local communities will continue to lead the debate over bag bans.

Editor's note: This story has been corrected to reflect the fact that Austin did not spend $1 million on an education campaign before passing a ban on single-checkout bags; the million-dollar program started after the bag ban.