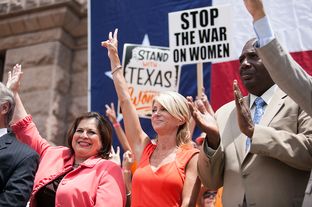 You would think, from all this chatter, that Wendy Davis was the name of the newest iPhone.

She got a bit of media coverage and a ton of social media traffic with her email announcement that she will announce her political plans on Oct. 3.

The only way for her to surprise the Texas political world on that date would be to unveil anything other than her campaign for governor.

She has already embarked on a change of subject — or at least a broadening of the conversation — pushing her interests in public education, for instance, instead of emphasizing the women's health care and abortion bill that made her a political celebrity.

Democrats are hoping Davis will spur others to join the ticket. Many of the mentioned but undeclared candidates seem, for some reason, to be based in San Antonio. Sen. Leticia Van de Putte says she is considering a run for lieutenant governor or perhaps land commissioner. Sen. Carlos Uresti has talked informally to others about running for attorney general. Rep. Mike Villarreal looked at and then decided not to run for comptroller.

That’s just a sampling, and they’re all undeclared. Houston businessman Mike Collier is looking seriously at a run for comptroller and has signed up the political consultants he would need for that. Former El Paso Mayor John Cook is running for land commissioner.

But that’s not a ticket yet. The others are waiting to see what Davis does, whether the money is available for competitive Democrats, and trying to decide whether Texas voters want to lower the Republican red flag that’s been flying steadily for the last 20 years. If Davis runs and runs strong, that could offset the need for lower-on-the-ballot candidates to build their own organizations. But they will still need money to make their names known, and they'll have to put together a set of issues and arguments that interest voters.

Filing is relatively early this year: Candidates for 2014 have to sign up for the primaries between Nov. 9 and Dec. 9.

The Democrats might have one advantage most of  their Republican counterparts don’t have: The GOP’s top races are hyper-competitive, meaning candidates will have to raise money and start their heavy politicking in time for the March primary elections.

Democrats, running in what appear now to be thin herds, might not have to gear up anything but fundraising until well into next year. If they don’t have primary opponents, they won’t have to blow their resources on March contests.