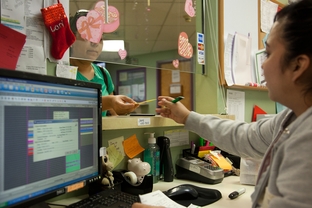 Enlarge Jeff Heimsath
A patient at The People's Community Clinic pays her bill as the cashier’s desk. The Community Health Assistance Program, a program that helps Texans get access to insurance, will run out of federal grant money in a few weeks.

As the U.S. Census Bureau released new statistics showing Texas again ranks highest for the percentage of people without health insurance, Gov. Rick Perry quietly laid out the next moves in his ongoing effort to derail Obamacare.

“We made the decision in the state of Texas that this is how we’re going to operate our state,” Perry said on CNN’s Crossfire last week, “that we don’t count as a big success the number of people on government assistance.”

Texas has fewer people with public health coverage than the nation as a whole — 28 percent of Texans had public coverage in 2012, compared with 32.6 percent nationally, according to the Current Population Survey data released by the U.S. Census Bureau on Monday. And while Texas’ uninsured rate increased to 24.6 percent from 23.8 percent in 2012 from 2011, the national rate of uninsured dropped slightly to 15.4 percent from 15.7 percent, which the census attributes to an increase in the rate of people with public coverage.

That trend is unlikely to change anytime soon in Texas since Perry has consistently opposed expanding Medicaid to cover impoverished adults, as the majority of states have chosen to do under the Affordable Care Act. Instead, Perry asserts that Texans can access health care without insurance, and Texas should not expand a “broken” Medicaid system.

In addition to directing the Health and Human Services Commission on to pursue permission from the federal government to fundamentally reform Medicaid with a so-called block grant waiver — essentially, a lump-sum payment — without expanding Medicaid, Perry directed the Texas Department of Insurance to enact strict regulations on federal “navigators,” individuals trained to help others find a private health plan and apply for tax subsidies to pay for it through the federal health insurance exchange that will launch in less than two weeks.

Both moves are highly political and unlikely to have an immediate, substantive effect on the implementation of Obamacare.

First of all, it's highly unlikely that the Obama administration would approve the state’s request for the no-strings-attached Medicaid waiver that Perry wants. Even in the off chance that the federal government considered the request, the conservative Texas Public Policy Foundation, which has pushed the Medicaid block grant idea for years, argues that the type of fundamental reform Perry directed the HHSC to ask for is impossible without the passage of congressional legislation to transform the governing structure of Medicaid.

Second, the Texas Department of Insurance has barely begun the rulemaking process, which could take weeks or months, to regulate the federal navigators. If the rules take effect by Jan. 1, as the governor’s office hopes, the additional requirements could have a chilling effect on the ability of navigators to assist people. Still, it may not entirely derail enrollment efforts through the federal exchange, given that many of the regulations he requested are forbidden under federal law, and people can still enroll in the exchange without the assistance of a navigator.

Before Perry ordered TDI to regulate the navigators, recipients of the federal navigator grants said they were on track.

“Really, things are looking very good right now,” said Tim McKinney, chief executive officer of United Way of Tarrant County, which in collaboration with 17 other organizations received the largest navigator grant at $5.8 million. “We expect to have training completed sometime next week, and we continue to hire navigators that will be funded from the grant.”

McKinney added that the organization has already recruited more than 136 people to undergo navigator training, even though the navigator grant only covers the salaries of 75. The additional navigators will either volunteer their services or be paid from other sources.

The East Texas Behavioral Healthcare Network, which received the second-largest navigator grant at $1.3 million, plans to have its navigators trained and assisting people by Oct. 15. The network plans to have 24 navigators at 12 centers to serve Texans from Dallas to Houston in the eastern side of the state.

The biggest looming question that could determine the success or failure of the federal health insurance exchange is how high the premium rates will be — and whether Texans will be inclined to purchase the plans, even with the help of tax subsidies. In general, rates will likely be higher for young, healthy people in the exchange than they would be otherwise, but lower for older, sick people. And the more people that choose to participate, especially the so-called young invincibles, the lower premium rates will be for everyone.

So how does this all come back to Texas’ uninsured rate?

Like it or not, Obamacare is coming — and the goal is to bring down the uninsured rate. Texas is not expanding Medicaid, so it's unlikely the rate of people with public coverage will change much. For the uninsured rate to drop, more people will need to find private coverage, and people who want to directly purchase health insurance will have more options available through the federal exchange. Ultimately, how successful or accessible those options are depends on whether Texans embrace those options.